EIP also treats maladaptive behavior patterns that result in relationship and life failures and thereby cause emotional pain and distress. This is the most novel part of EIP because it rests on a new theory of interpersonal behavior I developed from my clinical practice that is based on evolutionary psychology. This is called Stance Theory, which posits that humans have evolved psychological modules (analogous to computer programs) that govern their behavior toward different types of people and situations. These psychological modules improved the odds of survival and reproduction for early humans in the long-ago past, but may be maladaptive in modern society. There are twelve stances in all, and six of these are interpersonal and dyadic, meaning that they govern behavior towards other categories of people that tend to result in stable two-person relationships, or dyads. These six stances tend to form four common dyads, illustrated in the diagram below. This diagram is just one of many that explain Stance Theory, and is included here as an example. 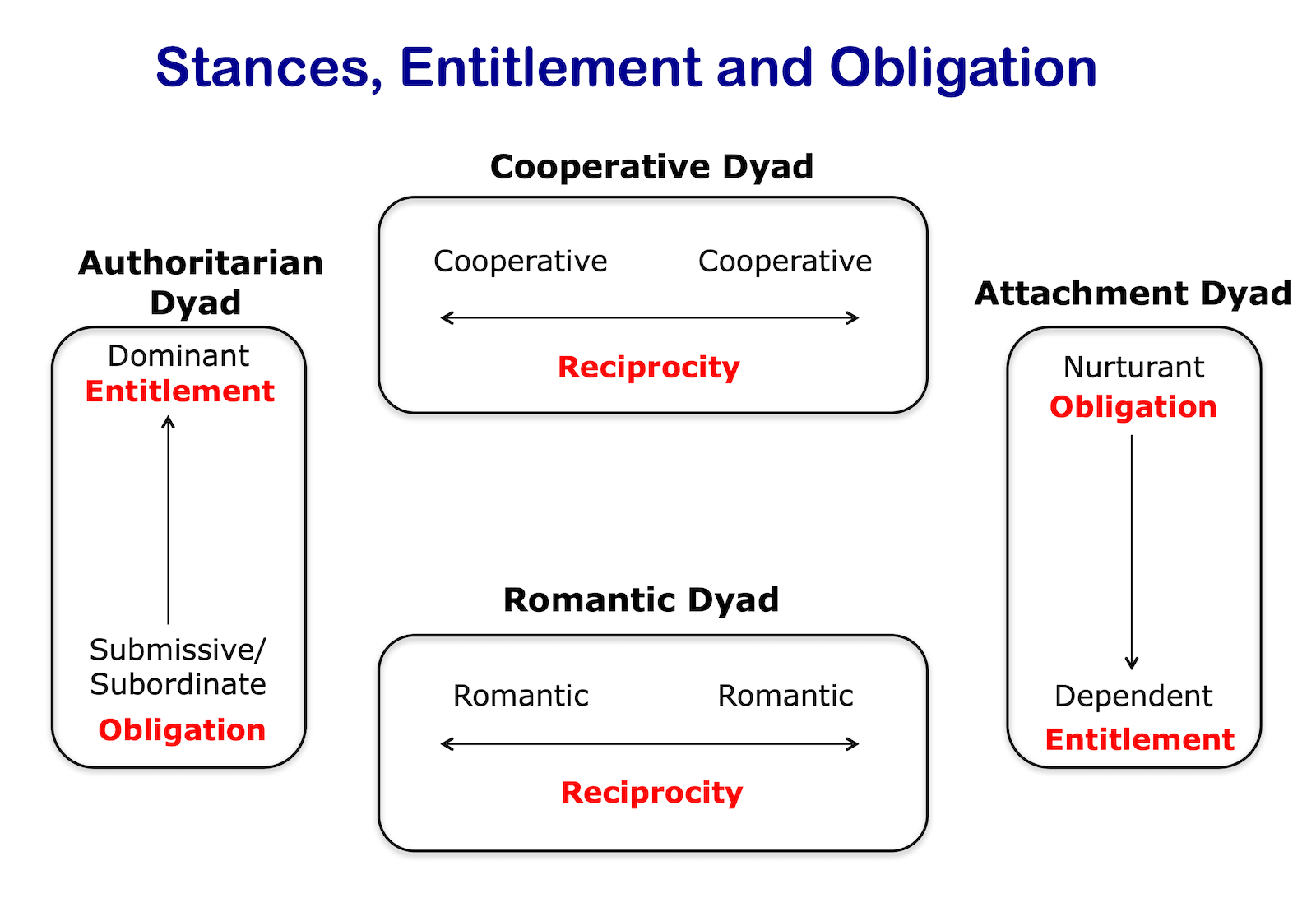 In the diagram there are four rectangles representing the dyads, labeled Authoritarian, Cooperative, Attachment, and Romantic. Within each rectangle are the stances that are operating for the two members of the dyad. In the Authoritarian dyad one person is taking a Dominant Stance, while the other person is taking the Submissive Stance. In the Cooperative dyad both persons are taking the Cooperative Stance, and so on. The Authoritarian and Attachment dyads are laid out vertically because there is a power imbalance, meaning that the person at the upper end of the rectangle (Dominant or Nurturant) has decision-making power and control within that dyad. The Cooperative and Romantic dyads are laid out horizontally because both members of the dyad are taking the same stance and power is equal.

The arrow inside each dyad indicates who gives to who within the dyad. In the horizontal dyads the arrow goes in both directions, meaning that both members of the dyad give to each other. In the vertical dyads, however, the arrow only goes in one direction, indicating that one person gives to the other, and not vice versa. The bidirectional stances (Cooperative, Romantic) are Stances of Reciprocity, the stances the arrows point towards (Dominant, Dependent) are the Stances of Entitlement, and the stances the arrow points away from (Submissive, Nurturant) are the Stances of Obligation.

This, in fact, is the source of human morality. According to Stance Theory, our moral feelings of right and wrong are determined largely by feelings of entitlement, obligation, and reciprocity, which are in turn determined by the presence or absence of various stances in any particular person. (In fact, Stance Theory also makes a much larger claim, which is that human emotions in general all come from our different Stances.)

Each Interpersonal Stance has an Activator, a Desire, and an Impulse. The Activator is a type of person, the Desire is the response the Stance wants from that person, and the Impulse is behavior used to get that response. For the Submissive Stance, for example, the Activator is stronger individuals who are acting dominant, the Desire is to obtain approval from the dominant person, and the Impulse is to give Obedience to the dominant person in order to obtain the approval.

If a Stance is consistently activated during childhood and consistently obtains its Desire, then it receives positive reinforcement and becomes a feature of personality. If this does not happen, then it does not become a feature of personality. This explains why different people have different patterns of Stances. Thus, if a child is dominated during childhood and consistently receives approval for obedience, the Submissive Stance will become a permanent feature of personality, and that person will respond to dominance by experiencing an intense need for approval from anyone who is dominant, along with very strong urges to obey the dominant person in order to obtain the approval. A person with a strong Submissive Stance will also often experience excessive feelings of obligation and insufficient feelings of entitlement in interpersonal relationships, because the Submissive Stance is a Stance of Obligation.

Most therapists, I find, are good at identifying and treating excessive feelings of obligation, but the same is not the case with excessive feelings of entitlement. I have had good success in dealing with overly entitled patients by identifying their excessive Dominance and Dependence and showing such patients how their moral illusions are constantly disrupting their relationships. This is often valuable in individual therapy, but I have found it absolutely indispensable in working with couples and families.

I often show the Stance Diagrams to patients, and use them in different ways. Frequently, I show the diagram above to patients and explain that the Authoritarian and Attachment dyads are the two possible parent-child dyads, because parent-child dyads have an automatic asymmetry of power. Then I ask which dyad they were raised in. This question usually evokes a huge amount of material from patients, which not only illuminates their childhoods, but also how their personalities emerged from their childhoods.

So, Evolutionary Integrative Psychotherapy is a model that weaves together theories of causation and therapeutic techniques from different schools of psychotherapy, and adds a valuable explanation of human behavior derived from evolutionary psychology. I have been developing it and teaching it for several years now and I feel that it now supplies a very large toolkit that can get beginning clinicians up and running early in their careers, but can also provide very useful ideas and interventions to experienced clinicians.